Salt Lake City playwright, David Sessions’ works touch on a wide range of subjects from a famous actress suffering from M.S. (Two Fisted Love) to a teenager who wears women’s clothes and is struggling to express his identity (The Winter Son), to a fantasy biography of Dennis Hopper that explores the roots of method acting and Hopper’s involvement with the beat generation (The Irrefutable Negation).

Salt Lake City playwright, David Sessions’ works touch on a wide range of subjects from a famous actress suffering from M.S. (Two Fisted Love) to a teenager who wears women’s clothes and is struggling to express his identity (The Winter Son), to a fantasy biography of Dennis Hopper that explores the roots of method acting and Hopper’s involvement with the beat generation (The Irrefutable Negation). 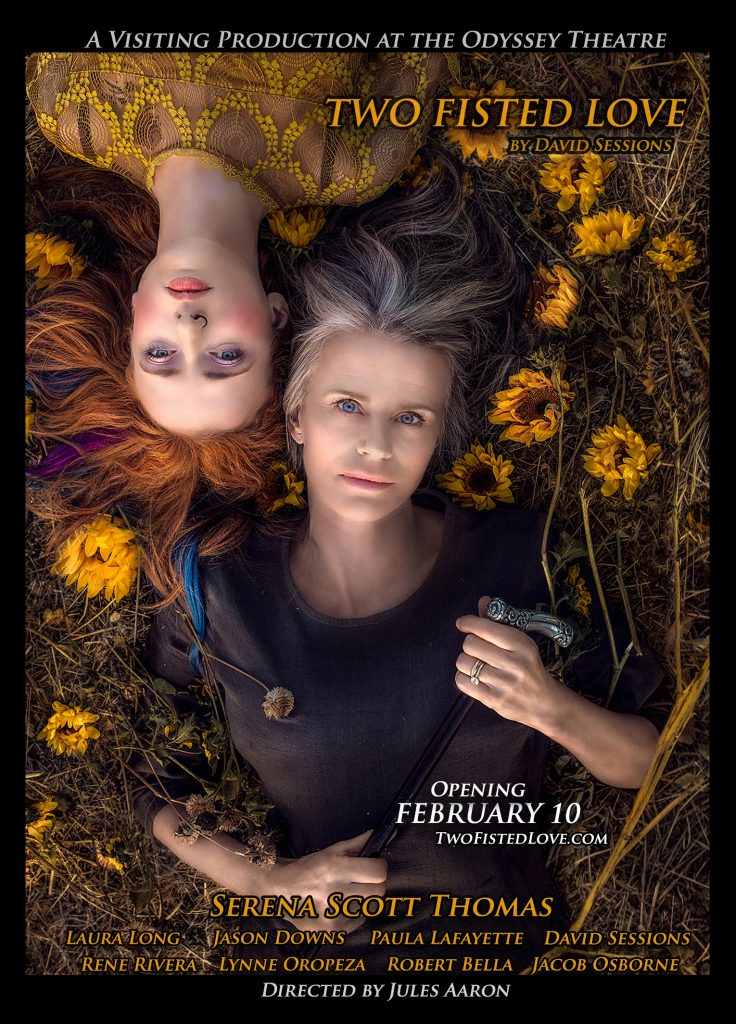 “..In many ways, the role of Caroline in Two Fisted Love is about the decline of the middle class in this country.  Her struggle with M.S. mirrors the turning away of so many people from what was so incredibly strong just a generation or two ago.  ..And of course she is surrounded by people, liberal and conservative, who are playing on her shortcomings and contributing to pulling her in that direction..”

“We had an incredible cast for that show.  Ms. Thomas reached out through her agent to say she had ‘fallen in love’ with the part and once she was on board everything fell into place from there. … Jason Downs was sensational.  He stole the show.  And all the reviews.  And of course we all hated him for that.  We were very, very lucky to have him.”

“Like many people in Utah, I am unbelievably sad to see the deep divisions that exist in our country today. …My plays embrace not only the hearts and minds that are trying to change this country for the better, but also a deep affection for the values, beliefs and traditions of people who are more conservative. I believe theatre is an incredible tool that has an important part to play in bringing things back together…”

Caroline anchors a cast who’s frailties reveal themselves ever deeper as her physical condition goes from a haughty successful woman to a frail shell clinging to her pride as her body succumbs to the inevitable.

…When I saw the premise of this play, I wanted to see it very badly.  The metaphors called me to witness a concentrated rendition of snippets of losses that I’ve seen in my own life played out in much slower motion with less dramatic, but no less poignant, emotional impact.

It did not disappoint.

Within the tragedy, the cast revealed that love, painful love, was a bond that permeated this family even as unspeakable disaster beset their lives.

David Sessions and director Jules Aaron capture the truth that life does punch you in the gut with both fists and that how we deal with it inside ourselves is what matters in the end.

I highly recommend seeing this play if you can.

…The topical nature and voracity are truly evident in the wonderful writing and superb acting.

Director Jules Aaron is a genius, proven multiple times over.  I was moved by the pathos, dry humor, irony of an absurd degree, and melodrama.

Two Fisted Love is a dynamic production at The Odyssey; well worth a ticket.

Touted as a dark comedy, Mr. Sessions says it is “..a modern drawing room comedy” which summons up expectations of Wilde or Coward.

I think Two Fisted Love should not be facilely pigeonholed.

The terrifically energetic Jason Downs gives a drug-fueled emotional meltdown that goes beyond the pale that leaves the audience stunned.  It is an extraordinary performance by an extraordinary actor.

Fueled, then ignited by these scenes, the play rockets to an unlooked for climax.  The denouement, a sweet coda, a lovely memory scene between mother and daughter from perhaps better times, cannot dispel the emotional fumes that still linger.